Fill out our fast form and get free price quotes from pre-screened local extermination companies for your vole problem. No credit card information needed and absolutely no obligation to hire. 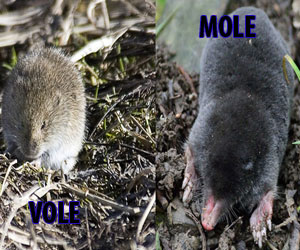 Gardening is one of the most exciting hobbies that anyone can take up. The thrill of working with your hands and bringing vegetation to life is very relaxing until pests begin to invade. Moles and voles are among the most common culprits faced by gardeners, and telling them apart can be challenging.

What's the Difference Between a Mole and a Vole

Both of these persistent pests are subterranean mammals that resemble big mice. However, a mole is smaller than a vole, and it's better adjusted to life beneath the ground. Their noses are pointier, they have big menacing laws for digging and their vision is poor. Moles are also insectivores and not rodents like voles. Moles are actually predatory, preferring to eat grubs and worms. They don't bother with plants, so any plant gnawing was definitely committed by a different animal. Rabbits don't actually burrow underground, but they may use a mole burrow, if their noses tell them food is on the other side. Moles are often blamed for the actions of voles, but they don't pose the same threat.

Are Voles Worse Than Moles

Voles are vegetarians, and they may chew on plant stems and eat potatoes or carrots. These pests are far more likely to spend time above ground and therefore, they leave more holes in the yard or garden. The holes are about the circumference of a shovel handle, and voles leave behind unsightly trails as they burrow. Voles also reproduce exponentially like rats and mice, so they can overtake a lawn or garden in a matter of months. A single vole can produce up to 50 offspring in a year as opposed to moles who only reproduce for a few months out of the year.

The Problem With Moles

Unfortunately, the burrowed holes left behind by moles can be utilized by rats and mice to gain access to your plants. Therefore a garden with only moles can still be destroyed, making them guilty by association. Their burrowing can also damage the root structure of flower beds and smaller trees. Moles are less likely to overrun a lawn or garden, but they're also more difficult to capture. Voles can be drawn out with peanut butter while moles will only respond to live bait. There are also subterranean gates and fences that can keep burrowers at bay, but eliminating them is a task best left to a professional.

Dealing With Moles and Voles

Voles can be drawn out more easily, but their numbers can also grow exponentially. Moles don't reproduce as fast, but they'll ignore most rodents poisons. Placing sonic chasers, mothballs and even plain water into their burrows can run moles off, but they may return. Voles can be dealt with through any means that's meant to kill rats or mice, but their numbers may boom before you can get rid of them all. The only sure way to get rid of voles is by using a professional with many tactics at his disposal. It's also important to remember that thousands of people have had their gardens destroyed, because they mistook voles for moles and the pests took over before the mistake could be rectified.