Fill out our fast form and get free price quotes from pre-screened local extermination companies for your mole problem. No credit card information needed and absolutely no obligation to hire.

Home > Rodents > Cost to Get Rid of Moles 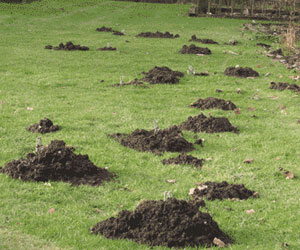 Moles can wreck havoc on a lawn, destroying carefully planted bushes and shrubs, tearing up grass, and ruining gardens. As they dig, they can also destroy roots deep under the ground, making it important to take care of them as quickly as possible.

Unless you are actively trying to catch a mole, it is unlikely you will ever see it. Moles live deep underground and move via a series of tunnels, which can be broken down into two types: "Deep" tunnels and "shallow" tunnels. Deep tunnels are invisible to us, but shallow tunnels are near the surface, and result in series of 3-5 inch high mole hills that indicate the presence of these creatures.

Traps are an option to catch moles. There are a number of types available, including a spear trap and an underground trap that goes directly in the mole's tunnels. Those with children and pets should be advised that the spear trap does contain spears, which are sharp and may injure someone if they are not careful. Other traps can be very effective, although sometimes moles will tunnel around a trap set into the ground. In general, traps can be very effective for one mole, but may not have the power to capture a family if the mole has already bred.

For those who want a more humane method, there are humane traps available, or the popular do it yourself "shovel" method. Humane traps will catch the mole, alive, so you can take him elsewhere. The "shovel" method involves flattening the mole hills to force the mole to show himself, then capturing him and taking him away.

Keep in mind that with both of these methods, not only will you be required to touch the mole, but you must have somewhere to take him. Always wear gloves to avoid the possibility of disease, and be sure you have a place in mind before catching the mole. Putting him into someone else's yard or near other people only moves your problem to someone else. Ideally, talk to local conservation groups to find out where he may be safe.

There are very few home remedies for moles, in part because they are very difficult to catch and remove without physically touching them. Some suggest making sure your yard drains well, as moles like dark places, and others suggest treating grubs, as they are the mole's primary food source. While neither is full-proof, it is a start if you only have one mole in your yard.

While moles do not live in communities, when a mole has babies, they have up to seven at one time. The resulting mole infestation can be severe, leaving homeowners with a partly destroyed lawn and little patience. If you have more than one mole, or find that traditional traps may be dangerous or time-consuming, consider hiring a professional exterminator. We can help connect you with a local professional who will be happy to help you with a free, no-obligation quote. Consider filling out the form to save your lawn today.